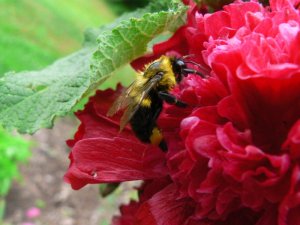 Mitch Daniels has gone missing. Oh, not so much that no one knows where he is, just that he’s staying out of sight, letting the state runs itself, so to speak. Not that the state couldn’t run itself better without him, just that he has taken away so much of what the state needs to be run effectively by anyone.

Oh, I know the Daniels re-election campaign ads that touted Indiana’s Economic Miracle, for which he took full credit. That, even though the miracle was all smoke and mirrors, and was being compared to meltdowns of gigantic proportions in Michigan, Kentucky, Ohio, and parts of Illinois. Never mind that the surplus which he touted was simply tax money the state kept instead of giving it back to communities, which forced those local communities to raise their taxes, making them out to be the greedy bad guys. In spite of the ads, any sentient being who holds reading in more esteem than the ability to blow smoke rings knew that we had a bit of an economic problem, as in massive unemployment, which affected the state Budget. Maybe now that he can’t hide behind misleading (read, untrue) advertisements, it’s understandable why Daniels dove for cover the minute the elections were over.

So, due to Daniels mismanagement, misdirection of truth, and inability to see the forest for trees, the Legislature had a gargantuan task passing a budget this year. It was made more difficult by the fact that they were not tending the immediate needs of a hard-pressed citizenry, but preserving the artificial Budget surplus Daniels wants in the bank so he can run for President on it in 2012.

To this end Mitch waited until the last days of the legislative session before torpedoing a looming budget which would have modestly increased spending on our adequate (at best) schools, and raided a third of the “rainy day fund” on the grounds that it was, well, raining. Then he called a special session, which had to pass a budget by the end of June or the state government would shut down, resulting in wildlife overrunning our parks, potholes to go unfilled on our roads, and raw sewage being dumped into local streams and rivers. Okay, those last two things happen anyway.

Daniels backed up his plan by holding rallies in Democratic legislative districts. I have to hand it to the man; if he imagined this would work he deserves the credit. Fact is that the Democrats, another term I’m finding it difficult to utter without making air quotes, who were fighting for that meagre increase in education, decided to cave on the principle that in a crisis it’s always a good idea to fall back on what you do best. So the only increase in education spending over the next two years will come from Federal stimulus money. You know, the stuff that isn’t stimulating anything. The stuff that Daniels tried to claim as his own contribution before someone explained to him what the word Contempt means in a legal sense. He already knew about the personal meaning. 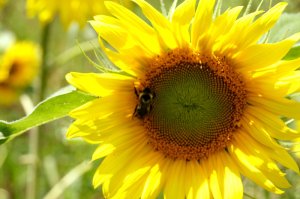 I went for a walk in the woods today with the camera and happened upon a nice patch of sunflowers.

Shafts of shadows settle softly
upon the wooded glen.
I came here often as a boy
and visited today, again.
I see it through a child’s eyes
and nothing is amiss,
but then a part of me awakens
and I see it how it is.
Once where regal oaks did stand
and blackberries did abound,
now a dozer’s blade laid waste,
my place of solace is not found.
Soon, homes will rise on this spot
and streets and lawns prevail,
and no one will know, nor care,
about my little wooded trail.
Serenity will be replaced too soon
with civilized sights and bustle.
Mowing sounds and honking horns
replacing the oak leaves rustle.
Oh to have another day to live
in that time so long ago,
before this place was treated such,
when I stood in youthful glow.
One more day to sit and think,
to just be quietly alone,
to lie there among the leaves
and sunbeams that once shone.

My childhood lives
just past the reach of time.
Down a darkened lane,
in the shadows of the woods
where the grass grows cool.
Somedays I visit there,
stretched out on the ground,
watching shapes in the clouds,
or butterflies flicker about
while my childhood tells me stories.
It speaks in hushed tones
with a lilting, soothing voice
and mentions names of friends
from fifty years now gone.
Friends who have not grown,
nor aged, nor changed
from the way they looked then,
boys of twelve forever.
It tells me stories of family,
of empty rooms and shadows
where those now gone
once lived, and laughed.
Of places now long gone,
and events long forgotten,
of places I cannot go
and people I cannot touch.
My childhood tells me stories
of laughter and of sorrow,
of hope and desperation,
but still it tells me stories.
And that is all I have
as the sun dips low
and darkness gathers about
at the end of this day.
Yet still I do remain
in that darkened woods
and greet eagerly the night
as gold fades to black.
For I do not live in light,
sunshine has long receded,
and the dark is all I know
as my childhood tells me stories.

Where are we then, you and I,
when evening spreads across the sky,
as we go, down certain streets,
whispering soft our retreats?
Gray fog against window panes,
swallows up our refrains,
curls up o’er night, asleep,
silent vigil the fog does keep.
In the nights of indecision,
constant change and revision,
slides a thought up the street,
through the haze, incomplete.
It ascends up the stair,
unseemly bold in brazen dare,
taking on the universe
on a course it won’t reverse.
It occupies another room,
one that I could not presume,
but one that I should’ve pondered
before it set out and wandered
upon narrow streets in the fog,
slinking with a stranger’s dog,
o’er night, for hours gone,
returning here with the dawn.
Then to its room to sleep,
dreamless appointments to keep,
as outside the fog lingers,
hazy pockets and tendril fingers.
I do not know what I mean,
a flickering image upon a screen,
for what I say, so meticulous,
in the light just seems ridiculous.