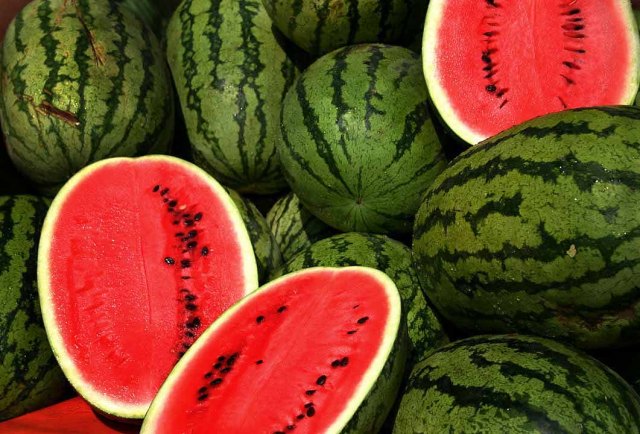 Watermelons originated in southern Africa, from where they spread thousands of years ago to the Nile Valley. In recorded history, seeds of this fruit have been discovered in the tomb of Tutankhamen. The Bible mentions watermelon as food consumed by the ancient Israelites.

Watermelon spread north to the Mediterranean and Europe with early Moors. They were carried as far east as China, which is today the largest producer of watermelon. Some have posited that watermelons were introduced to the Southern US by African slaves, but they were discovered being cultivated from the northern to southern states by Native Americans as early as the 1500’s. There is some debate today as to whether watermelons are a fruit or a vegetable.

The consumption of lycopene, contained most plentifully in watermelon at its peak ripeness, has been demonstrated to increase bone health. The amino acid citrulline in watermelon converts to another amino acid – arginine – in our kidneys and other organs, and in preliminary laboratory studies has been shown to assist the cardiovascular system, and possibly help lower body fat.

Surprisingly, watermelons are not just a refreshingly sweet, thirst quenching fruit, but are actually abundant in nutritional benefits, from vitamins and minerals to phytonutrients. They’re rich in vitamins A, C and B-complex compounds such as thiamin, riboflavin and pyridoxine. Watermelons afford a wealth of beta-carotenes, as well as folate, pantothenic acid, the amino acid citrulline and antioxidants lycopene, cryptoxanthin, lutein and zeaxanthin. They also contain anti-inflammatory phenolic compounds, which include both lycopene and tripterpenoid. They’re plentiful in the minerals potassium, manganese, magnesium, phosphorus and copper, with trace amounts of selenium, iron and even calcium. The seeds of the fruit offer a wealth of nutrients as well, and should not be overlooked! Because watermelon is so nutrient rich, it’s a great juice for fasting, cleasnsing and weight loss.

Watermelon provides a rich resource of electrolytes and is void of cholesterol and nearly absent of fat, while offering a modest amount of fiber and protein, and as little as 48 calories per cup.