This is the Republican plan in a nutshell, or rather a can. If the Ryan budget cuts are implemented as passed by the House of Representatives, seniors will pay an additional $6400 per year for Medicare, according to the non-partisan OMB. That’s after a lifetime of paying for the popular government insurance plan through payroll deductions.

If that comes to fruition, the Romney/Ryan cat food will supplant other forms of nutrition in the average senior’s diet. If they’re lucky enough to be able to afford the cat food. The good news is, it contains some nutrition. The bad news is, most of what it contains is filler with no food value.

You’ll note it comes in handy pull-top cans. That’s because seniors won’t be able to afford both the food, and an opener for the can. Also be forewarned. If you cut your thumb on the lid as it is removed from the can, you’re on your own. Medicare won’t cover such willful and thoughtless accidents on your part.

Oh, and have a nice retirement. 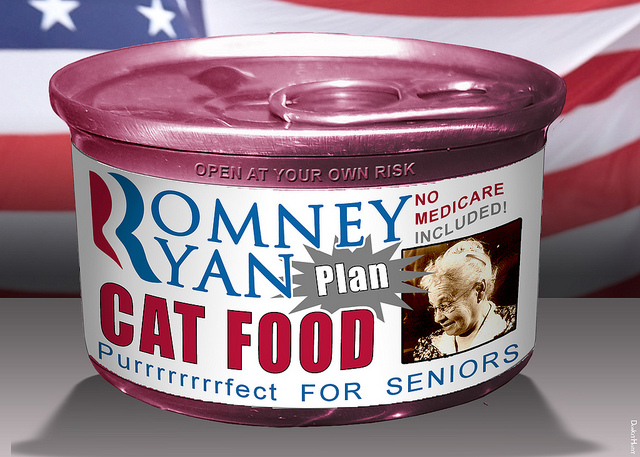 This is from one of the 2010 televised “Question Time” debates between the president and congressional Republican leadership. Here the president explains why Medicare Advantage needs to be reformed and where the savings should go.

Now I’m a participant in Medicare Advantage and have the private part of my plan subsidized by my private retirement provider, and must say that I love the affordability, flexibility, and overall care and access to care that it provides. I certainly don’t want to see it turned into the mutation that Romney/Ryan are proposing and envisioning, and I don’t think very many Medicare or Medicare Advantage participants would disagree with my viewpoint.

Nothing has been cut. Everyone is getting a better deal and paying less for it. According to HHS, Medicare Advantage premiums are down and enrollment is up. Hardly indicative of something that’s suffering and despised.

Now Ryan is on the campaign trail as presumptive nominee, Mitt Romney’s running mate, and he is echoing the mantra that the President is stealing $716 billion from Medicare to pay for the Affordable Care Act. We see him sitting in the video, apparently listening, and presumably comprehending what the President is explaining, and yet he’s now out there spewing the blatant lie about the gutting of Medicare, which is a total lie. Now he either knows he’s lying, or he didn’t understand what the President articulated in this meeting. One explanation calls into question his integrity, the other his intelligence. Either way you see it, should disqualify someone like this from holding public office, let alone the second highest one in the land.